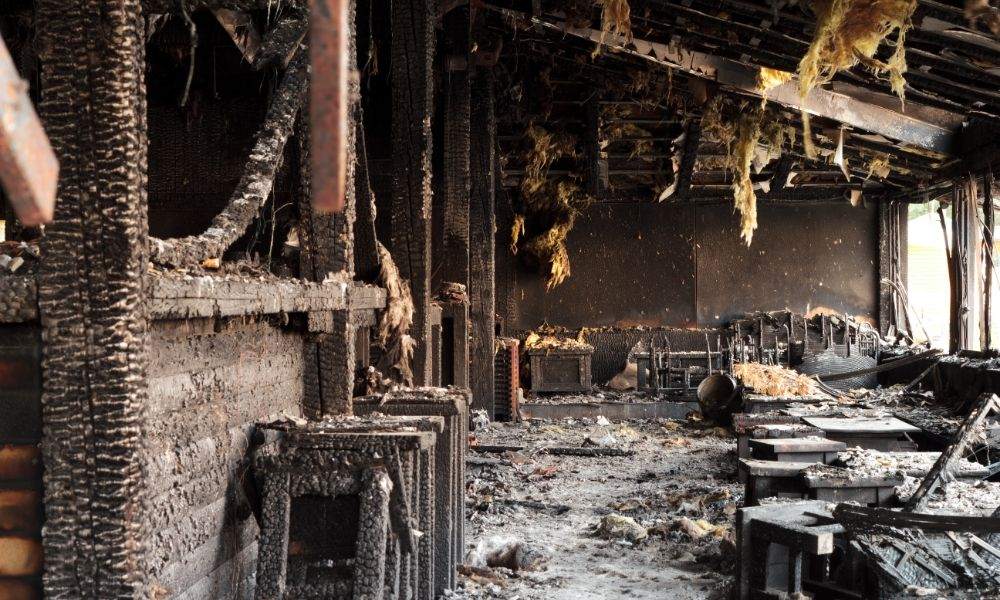 Having a fire in your home ranks up there among the worst tragedies. It can destroy your house or cause some minor cosmetic damage, but the damage it does to your peace of mind is immeasurable. A feeling of panic and helplessness fills your body and soul as you watch a fire damage everything you have worked for and take it all away. The good news among all this tragedy is that fire and smoke damage removal is possible.

Repairing your home and making it like new again is possible with the right smoke mitigation team. Aloha Restoration has the knowledge and experience you need. We know that there are different types of smoke damage and they all affect the home in different ways. Knowing the kind of smoke damage we’re dealing with is only the first step. Once it’s identified, repairing is next, and we do that better than anyone else in the Chicagoland area.

In the average home, there are many things that, once alight, will produce wet smoke. A host of consumer goods are made of plastic and rubber and they will create wet smoke when burning. Most times in the home have plastic or rubber in them. It’s not reasonable to suggest removing all those items from your house; just know that’s how wet smoke is made.

Wet smoke damage is easy to identify because of the smell that it creates and that lingers in the structure once the fire is extinguished. Wet smoke comes from slow-burning fires and low heat. The smoke is thick and black and will leave behind a thick sticky residue on the walls, ceiling, and anything else in the room. If you’ve ever tried to light a candle and the wick is having trouble catching, the initial smoke emanating from the candle is an example of wet smoke. If you hold an item close to the flame, you’ll see how it affects things. The object will turn black in the area closest to the flame. It’s difficult to clean wet smoke, because it tends to smear with ease.

Fuel/oil residue is not as common in homes or businesses as the other kinds of smoke damage. Also known as petroleum reside, this kind of smoke damage emanates from a fire that is started by a fuel source, or something flammable. Most homes don’t keep flammable liquids inside the home; they’re kept in the garage or a garden shed for exactly that reason. The fumes are noxious and hazardous, so they are better stored outside the home. A business will not have these things either unless they deal with them specifically. Auto repair garages, printing companies, or any other businesses that deal with flammable materials have safety measures in place to prevent such instances.

The danger lies in a building’s furnace having a “puffback”. The furnace doesn’t ignite correctly and releases smoke and soot into the immediate area. This is actually a small explosion, but it means you might be dealing with smoke residue and damage in a space that didn’t actually have a fire. The residue is dense, sticky, and very difficult to clean. It sticks to everything it lands on and leaves a foul odor that is hard to get out of furniture and anything that has fabrics on it.

This type of smoke damage is the most likely to occur in your home, or possibly a commercial kitchen or restaurant. Protein residue is the result of organic material, like meat or chicken oils and fats, cooking and evaporating during a low-heat fire. It doesn’t have to be the result of a fire, but normal day-to-day cooking in the kitchen, and it can also be the result of a grease fire.

Protein reside is difficult to see, with no visible streaking or damage. Make no mistake, though; it’s there. It will leave a permanent discoloration on the ceiling and walls when present. What gives it away is the smell—it’s strong. If you’ve ever burned a hamburger on the stove and walked into the house two days later and can still smell it, there is protein residue in the kitchen. People tend to underestimate the restoration needs of this kind of smoke damage, though, because it’s not as apparent as the other kinds. A mild discoloration doesn’t look so bad when compared to thick black soot. If not repaired, the smell will linger for a long time, well after the fire was extinguished.

Dry smoke is created by a fast-burning, high-temperature fire started by paper or wood. This would be the most common kind of house fire and can lead to massive amounts of damage and loss. If the fire is contained and put out quickly, the damage cleanup is easy compared to the other examples. Dry smoke damage has a powdery texture and won’t smear when cleaning it. That makes it fairly easy to clean.

What makes dry smoke damage insidious is how it falls into the tiniest cracks and porous surfaces. Even after the area is clean and looks brand-new, the smoke smell still lingers. The smoky odor isn’t as strong as protein or fuel smoke damage, but it will linger for as long as you let it. For professional smoke mitigation experts, this is the easiest to clean and remove.

Repairing the Different Kinds of Damage

There are three ways to clean up smoke damage; cleaning, resurfacing, and replacing, or a combination of the three. Aloha Restoration will come to your home or place of business to assess the damage and then discuss the best course of action with you. There is no one-size-fits-all solution to repairing smoke damage, so you know that we will customize the repairs and cleaning to fit your needs. Cleaning is the first option, and if we can’t do that, we will resurface the room and replace everything that we can’t clean. Know that once we are done, there will be no trace of the smoke damage—only the memories.